Ofcom completed their maintenance on Monday morning and I was able to login and swap my RSGB candidate number for a foundation level call sign.

The website is relatively limited and will only let you search for 3 letter suffixes rather than begins with / contains / starts with etc. In the end I gave up and let them allocate me a random call sign. I ended up with M6IJY (Mike 6 India Juliet Yankee).

I plan on doing some operating at the weekend at my local club, so hopefully I will make my first contact then.
at 22:44 No comments:

Last weekend I attended a two day amateur radio foundation licence training course at the Loughton & Epping Forest Amateur Radio Society (LEFARS) which culminated in an exam. The instructors made everything clear and easy to understand and I thoroughly enjoyed myself. After completing the exam I was told my 'indicative' mark suggested that I had passed, but today I received my official certificate from the Radio Society of Great Britain. 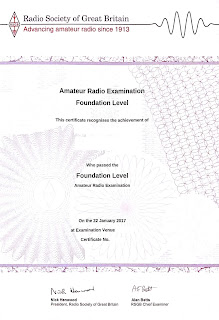 Someone recently showed me their latest cheapo Chinese import gadget - a PoE to Micro USB Converter that they were using to power a non-PoE enabled device.  As I'm never too far away from a PoE enabled port and they've reached a reasonable price point (£5.19 inc P+P) I thought it was worth picking one up on Ebay. I ordered one on the 12th January and it arrived on the 26th which puts shipping bang on 2 weeks - not bad from China. 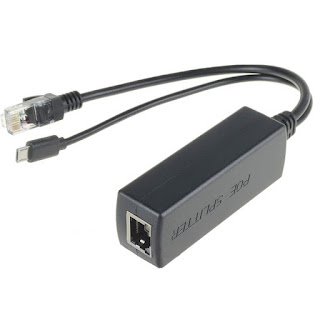 I've done some testing and it seems to be a little picky about its power source. The converter works fine with a 'proper' HP Procurve managed switch, but with a Netgear Prosafe switch the power light pulses on and off and the USB cable doesn't power up.

The converter is also lacking the molded tab to prevent the RJ45 from snagging shown in the picture above, so I'm not too optimistic about how long it will last before it needs re-crimping. I'm considering opening it up and placing it in a new enclosure with a proper USB A female socket to aid compatibility with other devices such as iPhones.

Overall for £5.19 I can't complain too much. I will use it a little more 'in the field' and do some load testing and follow up in another post.

I've dabbled with starting a blog in the past and thought it was about time I grabbed the bull by the horns so to speak. If anything it's aimed at documenting some of my trials and tribulations for myself, but if anyone happens to stumble across it and find it interesting / useful then all the better.
at 23:34