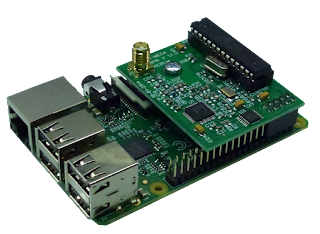 The customisability of the Pi's Linux based operating system means I can use one of several methods to connect to the internet, Ethernet, Wifi, or even 3G. The plan is to combine the connectivity with several power options - on board battery, PoE, or USB, which will enable me to operate almost anywhere.

I would use the MMDVMHost software to operate the DVMega, and also MMDVMHost-Dashboard to provide a pretty management tool that can show whose talking, which network the hotspot is connected to, etc.

I also wanted to make the Pi's file system Read Only, so I can pull out the power without worrying about corrupting the file system. This isn't feasible for all applications, but as the hotspot is just relaying traffic from the network to RF, there's not much writing to disk other than logs which can be stored in the RAM.

i) I operate the DMR hotspot for testing and development purposes. A dummy load is fitted to both the hotspot (Base Station) and DMR Radio (Mobile Station) to suppress RF emissions beyond the boundary of the premises to below the values laid out in the "Statutory Instrument 1989 No. 1842" which can be found here. More information from Ofcom can be found here

Therefore to the best of my belief I am operating within the confines of the law.

ii) The configuration laid out below is aimed at usability rather than security. The device should be protected from the 'public internet' using an appropriate firewall.

The configuration currently involves an odd miss-mash of init scripts and systemd services. In future revisions I'd like to get everything switched over to systemd.

It also starts a couple of services within screen sessions, which works quite nicely but doesn't feel like the correct way of doing things.

I'd also like to release an 'image' for users who aren't so comfortable using the command line.

The instructions below will over the basics of getting the hotspot working over Ethernet. I will cover the Wifi and 3G dongle in a future post to try and keep this one as brief as possible (ha!)

To get started the only things I connected to the Pi was the DVMega, Power and Ethernet, as I was hoping to avoid having to plug in a display etc.

I started off by downloading a Raspian Jessie Lite image from the official Raspberry Pi Website and copying it to the SD card. How you do this varies on your Operating System, but there's more information here.

Before removing the SD card and placing it in the Raspberry Pi, it's important to create a file called 'ssh' in the Boot Partition of the SD card which enables SSH.

Once done, eject the card, place it in the Raspberry Pi and power it up.

Once the Pi had finished booting, I discovered it's IP address by checking my routers DHCP leases, but the Raspberry Pi also displays its IP on an attached display whilst booting.

I then connected via SSH using the credentials below-

and then escalated my privileges-

Before you can start installing the MMDVM components it's necessary to customise the available packages, to remove some unnecessary packages and to install lighttpd webserver to host the dashboard-

Making the file system Read Only

Add the following to the end of the line of options-

And update the PID file location-

We now need to tell the fstab to mount some drives as read only, and mount others in the RAM-

The / and /boot partions need ro added to the end of the options, and other partitions are created as tmpfs (In the RAM). My fstab looks like this-

Adding Aliases to make switching between RO and RW Mode

It's sometimes necessary to switch between RO and RW mode when updating settings etc. To make this easier add some aliases to bash.bashrc.

And add the following at the end of the file.

You can then enter ro or rw in the consle to switch between modes, and the current mode will display.

Because we're mounting some partitions in the RAM, it's necessary to create some directories at boot time-

As we have removed fake-hwclock we need to ensure the clock stays up to date. We can do this via NTP-

Ensure the correct timezone is set-

And then edit the NTP conf file


And update the drift file location to the RAM drive-

Now the file system and tools are configured we can install and configure MMDVMHost.

Before we do so, we need to disable the serial and bluetooth interface, as MMDVMHost uses the serial connection to communicate with the DVMega-

Then edit the boot options file-

And remove the following section-

We can then download the files from git into the /usr/src directory, 'make' them, and then copy them into /opt/MMDVMHost-

And add the following. This is my 'native' configuration that connects to the Phoenix DMR network. You will need to update the sections in square brackets to your own details-

Copy the file to the DMRPLUS.ini file-

And then copy it to the BRANDMEISTER file-

For Brandmiester it's necessary update the server address and port-

Update them to the following-

The next step is to install and configure the MMDVMHost-Dashboard. The dashboard allows you to check the current status of the DMR network, switch between networks, restart the MMDVMHost process, and reboot the Pi. It also lets you see whose talking- 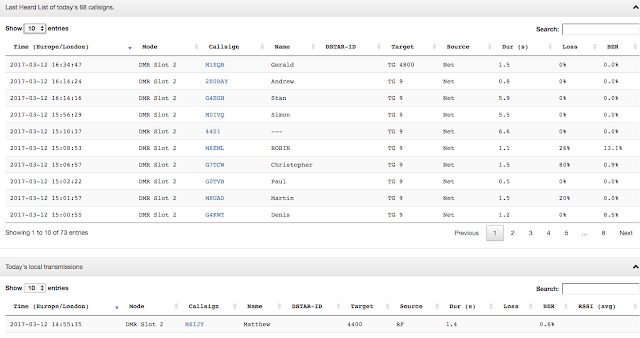 For sometime I struggled with getting the running dashboard as it was throwing errors when php-cgi was called. This turned out to be a knock on effect of linking /var/spool to the /tmp directory, as a start up script was altering the permissions on /var/spool which was also affecting /tmp.

With that done, we can now continue with installing the dashboard.

Copy the files to the web root directory-

We then need to set the correct permissions-

So the dashboard can restart the MMDVMHost service, reboot the Pi and switch between networks it's necessary to allow the www-data user to run limited commands as sudo without a password, so firstly we need to enter visudo-

And add the following line-


Now to configure the dashboard, access it in your browser- 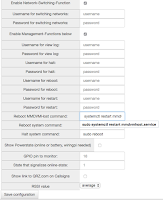 Press save once done.

Then copy the config.php file to a persistent folder, so changes can be made on the fly and saved to a temporary folder, saved to disk on shutdown, and then restored on boot-

To get things playing nicely with the read only file system, its necessary to create some more scripts to move things in and out of persistent storage during boot and shut down.

Next, create the shutdown script which will move the files from the temporary to persistent storage-

Now we need to set the correct permissions on the systemd script, add the symbolic link and enable the service-

The last step is to create the startup script for MMDVMHost. This consists of two scripts that ensure MMDVMHost starts 60 seconds after boot, once everything's settled down.

Adjust the permissions and add symlinks-

Reload and enable the services-

You should now be able to reboot and get started with the hotspot!

A big thanks to everyone below that made the above tutorial possible!