A Raspberry Pi and RTL-SDR based APRS iGate


APRS (Automatic Packet Reporting System) is an amateur radio based system for real time communications. These can include GPS location, short messages, weather reports and other telemetry such as the location of an amateur radio repeater.

APRS messages are often sent from low powered devices with limited range, so the protocol includes the use of digipeters - a device that receives an APRS message and then retransmits it, and iGates, devices that receive APRS and then send it to centralised systems over the internet.

One of these systems is aprs.fi, a site that stores and displays APRS data- 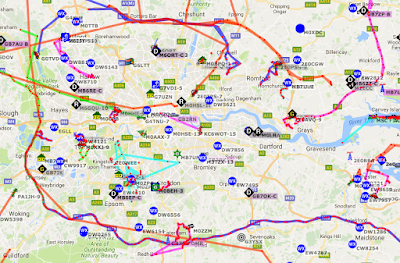 A few members of my local club (London Hackspace Radio Club) have been experimenting with APRS and found signal coverage is a little patchy in London, so I've decided to setup my own iGate. I'm hoping I will be able to pick up signals from the near by M25.


Previous posts have been detailed tutorials, however for this venture I used another tutorial from G6NHU's blog which I found to be complete and didn't need any tweaks. The blog also includes an image that speeds things up no end. I did have to recompile direwolf in order to get it to work on an older Raspberry Pi, but again its well documented in the blog post.

To build the prototype device I used the following- 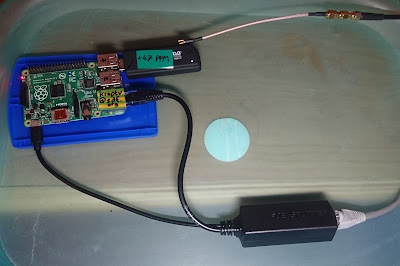 Once setup and configured my iGate then started logging packets to aprs.fi. I tested it by using APRSdroid on my Android phone in speaker / Mic mode, pressed up against a Baofeng radio. Pretty crude, but it was picked up by the iGate and relayed correctly- 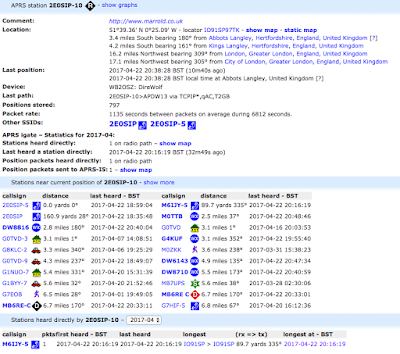 Now the prototype is working I'd like to make it a little more permanent, by upgrading the RTL-SDR, putting it in a water proof case and placing it outside. Unfortunately I need my nice Diamond x30 for accessing my local repeaters, so I will be swapping the antenna for a smaller whip.
at 20:54