I am currently preparing some STM32 'Blue Pill' Microcontrollers for use with an Amateur Radio project. From the factory these appear to arrive without USB support, so before we can flash any firmware over USB you must first flash a new bootloader over the UART interface.

I used a USB to Serial adapter set to 3.3v, but you could use the Raspberry Pi's UART if you wish. Remember, if you're using the Raspberry Pi 3 you will need to disable the built in bluetooth and TTY running on the UART first.

The following assumes you have connected to your Raspberry Pi via an SSH session or monitor and keyboard, and you've opened up a terminal.

Switch to the root user

The steps below assume you're running as the root user. You can switch to root using-

Roger Clark has written a bootloader for the STM32 Blue Pill that will allow you to flash programs via USB. You can download it from github-

James Synder has written a python utility for flashing the bootloader to the STM32 Blue Pill. Again you can download it from github-

Before you can flash the STM32 you will need to hook up the cables to the UART and VCC / GND and also move the BOOT0 jumper into the '1' position. You can use the image below as a guide- 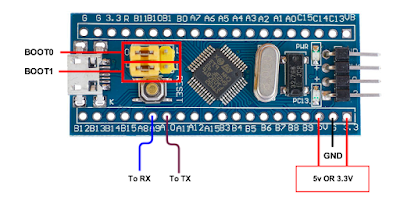 You will need to find which serial port your STM32 is connected to. If you're using a USB to serial adapter, you can run dmesg after plugging it in to see where it was assigned-

On a Raspberry Pi, the serial port will be-

Change into the stm32loader directory-

Run stm32loader to flash the bootloader-

You should see something like the following. Once its complete, you will return to the shell prompt-

Now the bootloader is flashed, you should be able to unplug it from the UART and power, move the BOOT0 jumper back to its original place, and start flashing programs over USB. You will know if the bootloader has successfully installed if you see a green flashing light on the STM32 when its first powered up. I will cover one method of flashing firmware to the STM32 in another blog post in the future.

Thanks to-
Param Aggarwal - Wrote this Blog Post, which is the source of this tutorial.
Roger Clark - Maintains a bootloader with USB support, compiled from various sources
James Synder - Wrote the tool for flashing the bootloader.