If you've read any of my blog posts it may have come apparent that I have a bit of a 'thing' for the London Underground. I can't tell you how many bogies are on an S Stock train or the unladen weight of a Bakerloo line train so I've not reached full anorak status yet, but I do go on the Hidden London tours whenever I can.

About a month ago my wife and I attended the Hidden London: Highgate Wilderness Tour which was a little disappointing, but this time round the Charing Cross really delivered. It didn't quite top Aldwych Station, but was certainly better than Highgate and Euston. If I had to recommend two tours out of those that I've attended so far, I'd say Aldwych and Charing Cross are the ones to go for.

The Jubilee line used to terminate at Charing Cross prior to the extension to Stratford, so the tour gives you the opportunity to see the disused Jubilee platforms and some of the other areas of the station that are usually closed to the public. 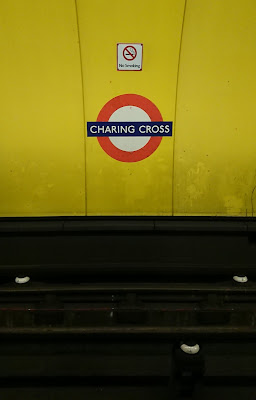 The tour starts off in the Charing Cross Underground Station ticket hall. You get issued a high-vis vest and then head down the Northern Line escalators to a set of grey doors at the end of the corridor (Some of you may of noticed them in the past). A key holder then arrived and opened up the mystery doors to reveal a set of 3 escalators, only one of which was running. 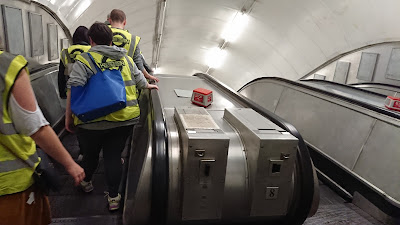 Once you've descended the escalator you end up in a corridor between the two disused Jubiliee line platforms and gather around some information boards to recieve a brief talk on the history of the station and how it came to be disused when the Jubilee line was extended to Stratford. There's a brief opportunity here to photograph the maps showing the original route between Stanmore and Stratford- 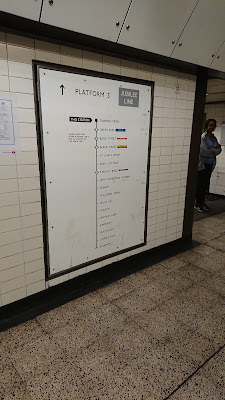 From there you then head onto the platforms and receive brief talks from the guides on how the platforms continue to be used for filming, testing out new construction techniques and materials, stabling of trains to put into service during peak time, training of emergency services, and for the loading and unloading of engineering trains.


Once you've walked the length of the platforms you then return to the central corridor to watch some clips from films that have been shot at Charing Cross, including Paddington, James Bond: Sky Fall and creep, where the guides point out some of the continuity errors such as the subsurface cars running on the 'district line' in Skyfall.

You then head up another set of stairs back into the public area of the station to walk to the next part of the tour. The tour group splits into two and are both led to one of the grilled doors in the station corridors that you've probably always wondered what lies behind them. 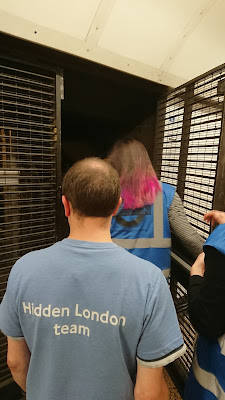 One of the doors leads to a tunnel that was used for removing spoil during the construction of the tunnel. The guides pointed out some of the tunnel rings were dated from the 60s and were spares left over from the construction of the Victoria line, which then changed to more modern concrete rings once they'd used up the left overs. They also point out the curve of the tunnel, which was required to avoid the huge foundations of Nelsons Column. Interestingly the tour stops and turns around before the service tunnel ends, making you wonder what else there is to see down there...


The second door heads into a ventilation shaft that supplies fresh air into the station from the surface. You head to a set of grills that are directly above the tracks of the Northern Line, allowing you to see the trains and passengers milling around below. (For those of you that have been on the Euston tour this may sound familiar) 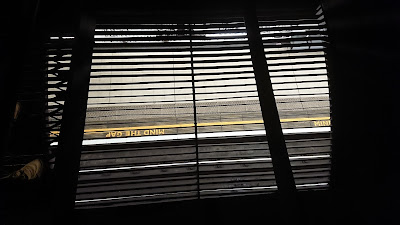 You're then double back onto yourselves and head to a walk way surrounding a large vertical tunnel that leads up to day light above and down into a deeper shaft that serves the lower levels of the station.


You then exit the tunnel and head back to the ticket hall where the tour ends.

Overall, Charing Cross was a great experience. I hope to go back sometime with a better photographer, as my pictures don't do it justice.
at 19:55