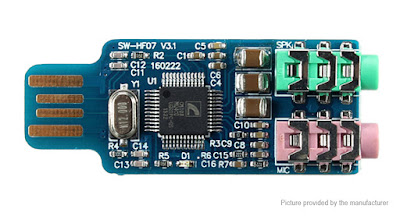 The modifications documented below add an input for COS (Carrier on Squelch) and an output for PTT.

You will need the following components. You can substitute alternatives in if required, but ensure they are a good match for the original components.

The first step is to remove the 3.5mm Jack Connectors from the PCB. I throughly recommend using hot air to remove them. I used an 858D, a cheap and cheerful hot air station that can be had for £30-35

The next step is to cut some tracks to free up some pads, so you can attach some additional components. You can use a Dremel, but I used a screw as a centre punch and then used a small drill bit. You don't need to go too deep, just enough to remove the copper. I then use a multimeter set to continuity mode to ensure the tracks really have been cut.

You will also need to remove the bias resistors. I used hot air for this, heating them up and then removing them with a pair of tweezers. You need to be careful not to apply too much heat or surrounding components may move or tombstone, but if one does move you can move it back in position and apply some hot air to re-solder it in place.


Add the Potentiometer and Transistor

The next step is to add the potentiometer and transistor, in that order. I had to extend the central leg of the potentiometer so it could reach the correct pad. Before soldering the pot to the PCB, I also added lengths of 1mm heatshrink

Add the Diode and Resistor

Once the potentiometer and transistor have been added, it's time to add the diode and resistor. This involves soldering them to legs on the CM108 chip. It's fiddly, but fortunately as these are at the edges of the chip, its not impossible. Again, remember to add some heat shrink before soldering them to the PCB.

Heres a picture of the completed CM108 USB fob, showing the various input and output pads

A big thanks to:
If I have missed anyone involved with the CM108 modifications, please let me know so I can add them!
at 12:28