I started off by testing a band pass filter. I bought this Aerial Facilities 100 - 300 MHz bandpass filter a while ago with the intention attempting to adjust it to the amateur band but didn't get around to it. I can't recall the exact price, but it was cheap.

On the laptop ( Running Ubuntu ) I used dnegrych's spektrum program to capture the results. Note there is a newer and much improved version in this repo from pavels - I had issues with it when I tried to install it a year ago so I reverted to the more basic version. In retrospect I should have tried the pavels version again, but I've only thought about it as I write this blog!

Configuring spektrum is relatively simple. First of all you set the range you're interested in, taking into account the range of the SDR ( 25-1750 MHz in the case of the Nesdr Smart ) and the trade offs between sweep time and resolution etc.

Once you've set the range, you need to null out spektrum, by connecting the SDR directly to the noise source ( In my case leaving the DC Block and Attenuator still connected) and clicking relative mode. Allow spektrum to perform a couple of sweeps and then click "set relative" - this nulls out any discrepancies in the output from the noise source, so the graph should now should an almost straight line at 0dB.

Next I attached the filter inline and waited a few seconds for Spektrum to complete another couple of sweeps. I was pleased with the result, the graph clearly showing the pass band of ~90 - 310 MHz with very little insertion loss and about 13dB of rejection (Of course these are uncalibrated values) 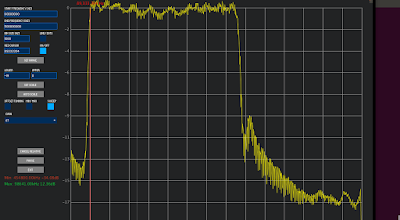 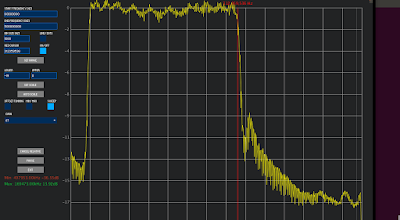 One I was happy with the results from the filter, I thought I'd move onto using the VSWR bridge to test some antennas.

The test setup was mostly the same but rather than inserting a filter between the noise source, I inserted the VSWR bridge. I left the DC block and 6dB attenuator inline to prevent any damage.

The theory is you apply an RF signal to the input of the bridge which is then connected Device Under Test (DUT). Any reflected power will then be directed out of the output of the bridge. A low point on the graph suggests that the majority of the power is going out the antenna rather than being reflected back towards the source.

To set the relative value I ran a few sweeps with nothing attached ( Maximum SWR ), before attaching an antenna to the DUT connector. To get accurate readings the antenna needs to be as far away from other objects as possible, ideally in free space. Even waving your hand near the antenna can affect the reading. The test setup looked something like this:

The results were quite interesting, showing that the antenna does indeed work, but isn't really in the 2m or 70cm Amateur Bands

Overall I was pretty satisfied with the results. Nothing is calibrated and it's very much only an indication of filter and antenna performance, but it was nice to see the theory working, albeit crudely. In a few weeks I should have a NanoVNA, so I may well perform similar tests again and compare the readings.
at 23:27