Creating your very own 56K Dial Up Internet connection in 2022

I've recently been bitten by the analog telephony bug (again) and thought I'd have a go at creating a dial up Network Access Server (NAS).  After some trials and tribulations and with the help of some great people online I've managed to get it working, and once again heard the glorious sounds of a dial up modem connecting to the internet... to quickly discover that bloated web pages make the experience even slower than I rememeber. 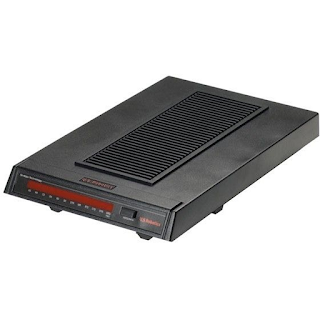 It's assumed you're already vaguely familiar with Cisco IOS - the operating system that runs on most Cisco gear, or at least used to some flavour of command line interface. You'll probably have to connect to the router via serial to get it setup initially, and it may need factory reseting. That said, if you've not use Cisco gear before the setup isn't too difficult, you'll just have to study some other guides to understand accessing and configuring the basics. If you do get stuck please get in touch and I'll see if I can help.
I have tested the setup on a Cisco 3825 and Cisco 3845, but it might work with others with some adjustment. The config has been tested on IOS 15.3, but I'm guessing it'll work on any version from 15.1 onwards. I had some issues with FXS card support and the network-clock-participate command on 12.4, so I'd avoid it if you can.
Also, fair warning, Cisco equipment is loud. And power hungry. My setup is drawing ~100w at idle, which is around £15 a month in electric bills if left on all the time.

To build your own Dial Up NAS you will need to obtain some obsolete networking gear. I aquired everything from eBay. If you're not in a rush you might get some bargains that go up as an auction. It's also worth studying the photos - some listings will already have an E1/T1 or FXS card in for the same price as an empty version. Try making an offer if the option is available - some of this stuff has been gathering dust for years and the seller will be happy to see it go.
It's worth noting that the Digital Modem Module and NM-1CE1T1-PRI card are the rarer bits, so I'd suggest obtaining them before buying everything else.

* Each MICA-6MOD will handle 6 modem calls, so for a basic system with 4x FXS ports you just need a single module.

The Cisco 38XX ISRs offload audio transcoding and some other media handling to Packet Voice Digital Signal Processor Modules, or PVDMs for short. These look very much like RAM sticks, and slot into similar slots on the motherboard. They come in different capacities, starting from 8 channels and going up to 64 channels.
For the above setup with 4 FXS ports and all calls routed internally you can get away with 8 channels. Thats 1 for each FXS port, and 1 for each channel on the E1, making a total of 8. If you add more FXS ports you will need an additional 2 channels per port (One for the FXS, one for the E1)

A call coming in over the E1 to the modems doesn't require any DSP resources as it's handled by the modem modules, so if you don't have any FXS cards in the router and calls are being routed from somewhere else via the NM-1CE1T1-PR you can get away without any PVDMs.

Calls must enter the digital modem modules via the NM-1CE1T1-PRI module. They cannot arrive via VoIP, or an FXS card, or the newer E1/T1 cards
Its been hypothesised that this is because the digital modem module was made for older platforms that lacked an internal TDM "backplane" so used other trickery to fake it, which is dependent on compatible modules.
In order to route calls from the FXS ports to the modem, we route calls out an E1/T1 link and back into the router. It sounds odd but it works, and means we can do everything in a single box. You could also use this method to route VoIP calls to the modems.

The digital modem modules are picky about the model of card you use. I've tested a NM-1CE1T1-PRI, and the NM-2CE1T1-PRIs should also work. The NM-1CT1-CSU and NM-2CT1-CSU reportedly work in the 36XX series, but haven't been tested in the 38XX series.
If you want to save yourself any hassle get yourself a NM-1CE1T1-PRI

Once you've aquired all the bits it's time to put it together. You'll likely need a philips screwdriver for this part.
For my setup with the 3825 I inserted the cards in the following slots:

Remove the blanks and then insert the cards in the slots. Be careful with alignment, it's possible to damage the cards if they're not aligned and forced into the slot. Once inserted, do them up. Finger tight is fine - they really don't need to be tightened with a screw driver.

Once the modules are in their slots you can connect the E1 crossover cable between the PRI and T1/E1 cards. Connect Fa0/0 to your network and power up the router.

Go ahead and configure the basics such as the IP on Fa0/0 and enable password. If you've not done this part already you may need to use a console cable to get things setup before you can then SSH in to complete the rest.

Plug your modem into a port on the FXS card using a RJ11 to BT adapter if required. Configure your OS to dial 1000 to access the internet. The username is "dialuser" and the password is "password". Once you start connecting you should hear that nostalgic screech of a modem and it'll take just under a minute for the connection to establish. You should then be able to browse the internet.

I wouldn't have been able to achieve this without the help of some amazing people online who patiently put up with my questions for several months:
at 14:02