Retrobright, also known as Retr0bright is a process of bleaching sun damaged ABS plastic back to the original colour using a solution of Hydrogen Peroxide and laundry oxidixer containing TAED. It was originally developed for restoring retro computers which left the factory an off-white / light beige colour and often went yellow or even brown with age.

As you may know I've started collecting / restoring old telephones and the ABS plastic the GPO used to make phones in the 60s onwards also suffered from the same yellowing issue. It's most obvious on the Ivory models (Frequently sold incorrectly as "Yellow") but also affects the appearance of the coloured models, most notably the green and grey versions.

I've retrobrighted a couple using UV light, but in the UK the sun is variable and almost non-existant in winter, so I thought I'd try using heat instead of UV, and do some testing with different concentrations, temperatures, and amounts of oxidizer.

Hydrogen Peroxide is a bleaching and oxidizing agent. You should wear eye protection and gloves when handling it. Please do you own research and take suitable precautions before trying to replicate this experiment.

Theres a few different permutations I wanted to test which I've laid out in the table below.
I opted for 250ml of fluid as it was just enough to adequately submerge the thermocouples. In practise you just need enough to submerge the object being bleached. Note I was also using standard Hydrogen Peroxide (H2O2) not the cream type used to bleach hair. For Oxidizer I was using off-the-shelf "Vanish Oxi Advance Crystal White" and the H2O2 was obtained from EBay.
To closely control the temperatures I used a PID controlled water bath that I have constructed myself. I then partially submerged jam jars containing the bleaching solution and part to be blached so the level inside the jar and in the water bath was about equal.
ABS is semi-bouyant in a Hydrogen Peroxide and Oxidizer solution, made worse by bubbles that form during the process, often causing parts to float. To avoid this, I hot glued them to stainless steel nuts.
Each experimant was ran for 6 hours. 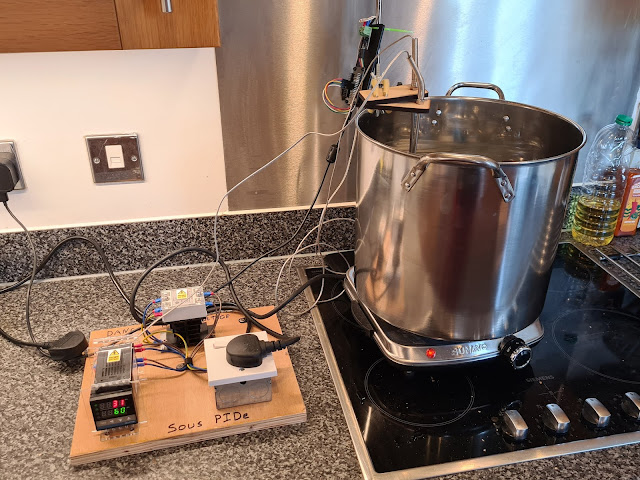 The PID controller and water bath warming up. 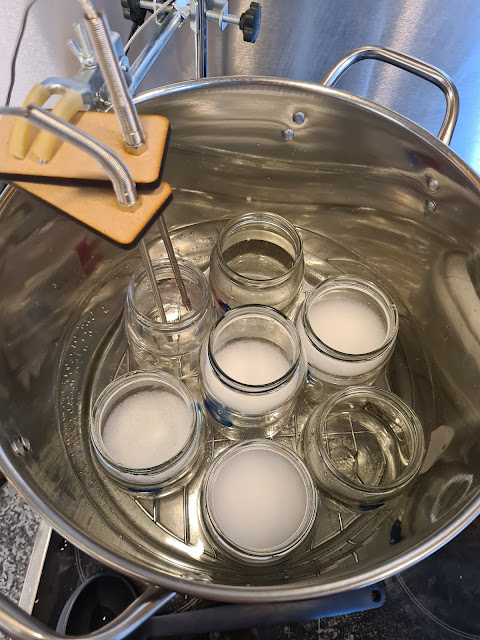 Inside the water bath showing 7 jars, 6 under test and one "control" for measuring the temperature

It turns out trying to accurately photograph the results is somewhat challenging especially without studio lighting etc, but hopefully you can see the differences. 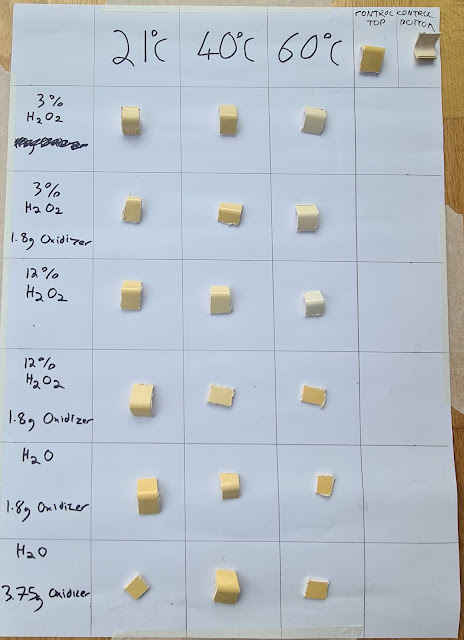 Results
As you can see the higher temperatures with stronger concentrations of Hydrogen Peroxide had a strong bleaching affect which isn't too much of a surprise. Interestingly the 12% + Oxidizer solution didn't bleach any where near as effectively as without the oxidizer where as at 3% the results are about the same. It could be an anomaly but the results were similar for the coloured ABS.
It's hard to tell from the image but the 12% solution is slightly over bleached, having lost some of the ivory. Reducing the time it was submerged would have probably remedied this.

The most accurate colour match is probably for the 3% solution at 60 degrees. The Oxidizer appeared to make little difference. 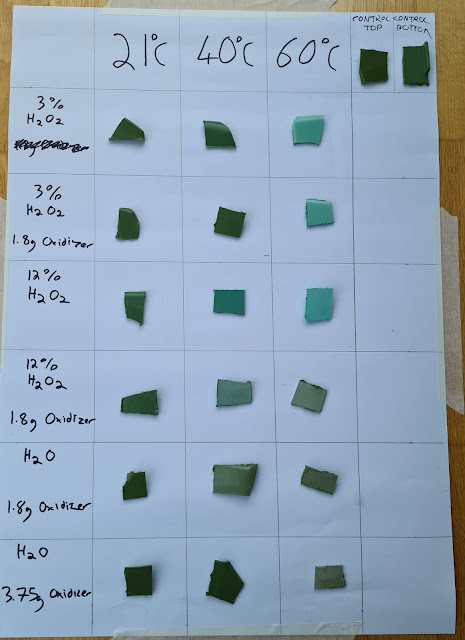 As you can see, with green plastic the results are dramtically different to the Ivory plastic, with significant bleaching and discolouration to the point where some of the parts are almost turquoise.

It's not obvious from the image but the parts that were in solutions containing the oxidizer have developed an uneven cloudy finish, most noticably in the 12% concentrations.

It's said that the best way to cook meat is "Low and Slow" - and perhaps unsurpisingly the same applies to bleaching plastics.

The green plastic in particular was very sensitive to bleaching and it was very easy to over do it and dramatically alter the colour. It seems you can get away with stronger solutions and temperatures with Ivory plastics.

The original recipe calls for Oxidizer, but for my experiements it either had little effect or made things worse - especially for the coloured plastics. I probably won't be using it in future as its just another thing to buy and measure out.

I also had an issue at one stage with the 12% Hydrogen Peroxide and Oxidizer solution going exothermic and appearing to be close to boiling. I measured it as being over 80°C whilst the surrounding waterbath was at 60°C. I'm not sure what happened there - it would appear a contamination to the jar, solution, plastic, hot glue or stainless steel nut triggered some kind of reaction. After the jar was emptied and re-filled it didn't occur again.

With the above in mind, and given the outcome of the experiement, I won't be using 12% again, but aiming for 3% with coloured plastics and possibly as high as 6% for ivory and whites. (I'll still buy 12% and dilute it to reduce shipping costs.) I'll also be sticking to 40°C because at 60°C I had issues with the hot melt glue going soft and the weights falling off.

Keep in mind that results may vary between different colours and batches of ABS, so it's best to keep an eye on it and remove once its done. I've also observed that the colour can continue to change after being removed from the H2O2 and rinsed, so you're better to take it out early, wait, and put it back in if required rather than over doing it.