Upgrading the Firmware on an APC 7922 Switched PDU with FTP

I recently aquired an APC 7922 Switched PDU as part of a bulk purchase. Its a chonky box that sits in the rack at a data centre and distributes power to servers, switches and routers etc much like a 16 gang extension lead but it allows you to remotely switch devices on and off, monitor their power usage, and do things like add delays to devices powering up when the power is restored - useful for managinging in-rush current.

Whilst it's a nice bit of kit its not particuarily useful to me, especially give that the sockets are IEC13, so I thought I'd stick it on eBay where it could still get £100+ despite it being relatively long in the tooth.

Before I listed it I thought I'd do some house keeping - Factory reseting it, testing it worked, getting the firmware up-to-date and finally it was just an excuse to play with it as it has been several years since I worked with this kind of gear.

The following blog post should help you get an APC 7922 upgraded to the latest firmware using FTP. Why FTP? I hear you ask. Well, I can't SCP it because it uses some ancient SSH implementation that wont play ball, and I couldn't find anywhere to download the "Firmware Upgrade Utility" - so FTP it is. 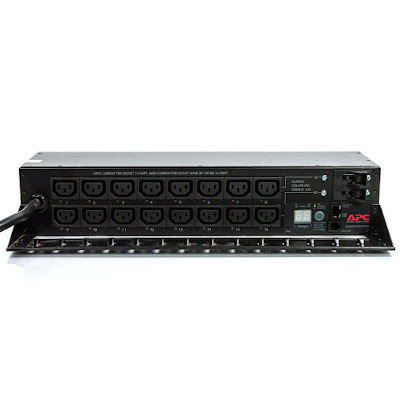 I'm assuming you already have IP access to the device and know the configured credentials. The defaults are apc / apc
I used a Windows machine to perform the upgrade, but you should be able to use any device that supports FTP.

FTPing the files to the PDU

I had issues with Filezilla so I did it the old fashioned way from the Windows command prompt. It appears Windows 10 still has FTP installed natively which came as a bit of a surprise, but it works.
You will need to perform the following commands twice, once for each of the bin files. Once one has uploaded the PDU may reboot and disconnect you for a minute or two. Thats normal.

Once you've uploaded both files, you should be able to connect via the serial console / telnet / ssh and confirm the version has upgraded on the top right of the status screen: 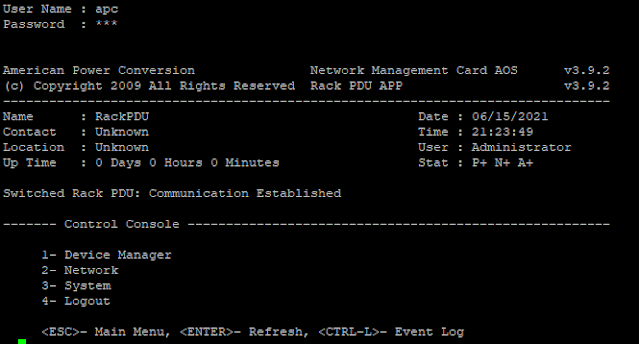